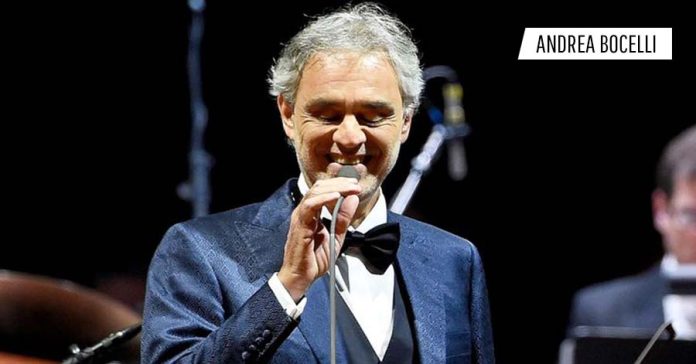 Andrea Bocelli is a tenor and multi-instrumentalist, and he was born visually impaired. When Andrea was 12, he became completely blind following a brain hemorrhage after a football accident. He then started performing in piano bars in the evenings and also competed in local singing contests. Andrea signed his 1st recording contract with the Sugar Music label, and in 1994, he rose to fame by winning the 44th Sanremo Music Festival, where he performed “Il mare calmo della sera.”

Since that year, Andrea has recorded 15 solo studio albums (pop and classical music), 3 greatest hits albums, and 9 complete operas, selling around 75 million records worldwide. In his career, Andrea has successfully led classical music to the top of international music charts, and his album Romanza is one of the best-selling albums. At the same time, Sacred Arias is the biggest-selling classical album. My Christmas is one of the best-selling holiday albums in the US. The 2019 Sì debuted at no.1 on the US Billboard 200 and the UK Albums Chart, becoming Andrea’s first no.1 album in both countries. Another song, “Con te partirò” from his 2nd album Bocelli, is the best-selling single, and in the late 1990s, the track eventually became popular in Italy.

In 1998, Andrea was in one of People magazine’s 50 Most Beautiful People. He duetted on the song “The Prayer” with Celine Dion for the animated film Quest for Camelot. His name was listed in the Guinness Book of World Records after his album titled Sacred Arias release, as he simultaneously held the top 3 positions on the US Classical Albums charts.

In 2006, Andrea achieved the Grand Officer post of the Order of Merit of the Italian Republic. In addition, on 2nd March 2010, for Andrea’s contribution to Live Theater, he was recognized as a star on the Hollywood Walk of Fame, and in 2022, Andrea was awarded a Gold Medal for Merit.

The Italian tenor Andrea Bocelli has gathered countless fans with his classical music and ingratiating vocal style. Andrea’s repertoire is eclectic and encompasses everything from Europop to operatic standards; in addition, his arena shows invariably attract a crowd of enthusiastic listeners.

The most recent addition name in Andrea’s creation list is “A Family Christmas,” which was released in October. The album is a collaboration featuring his son Matteo, 25, and his daughter, Virginia, 10. Both the children join him for the current tour.

Andrea was born on 22nd September 1958, with impaired sight, with congenital glaucoma. He was raised on his family’s farm located in the remote village of La Sterza, Tuscany, Italy. The family used to sell farm machinery and also made wine. Andrea showed great passion as a young boy, and his mother said the music would only comfort him. At 6, he started piano lessons and learned to play the saxophone, flute, trumpet, guitar, trombone, and drums. Andrea got the first record of Franco Corelli from his nanny Oriana, and he started showing interest in a tenor career.

Andrea lost his vision completely when he was 12 due to a football accident. He played goalkeeper during a match, and the ball hit him in the eye; he experienced a brain hemorrhage. Doctors tried to save his sight, but they did not succeed, and he remained blind.

Andrea gave his 1st concert in a small village near where he was born, and at age 14, he won his 1st song competition with “‘O sole Mio” at the Margherita d’Oro (Viareggio). Along with his university studies, Andrea performed in the evenings in piano bars to earn money.

Andrea enjoys horseback riding and is a big fan of the Italian football club Inter Milan.

On 11th August 2003, a part of the beach in Jesolo, Italian Adriatic coast, was named after Andrea.

Andrea was born to Alessandro and Edi Bocelli. His mother, Edi, and younger brother, Alberto, reside in the family home, whereas his father died on 30th April 2000.

In 1980, Andrea finished secondary school and then attended the University of Pisa, specializing in law. After completing law school, he spent 1 year as a court-appointed lawyer.

Andrea stands 6 ft 1½ tall and weighs around 75kg. He has a slim body build with a fair complexion. Further, he has beautiful green colored eyes, and his hair is greyish due to his age.

According to Andrea’s birthdate, he falls under the zodiac Virgo and is currently 64 years old. His birth flower is Morning glory, and his birth element is Earth. Virgos always pay attention to the littlest details and have a deep sense of humanity. They see life as methodical. In addition, some Virgo qualities include self-effacing, diligence, practicalness, gentleness, kindness, observance, etc.

Andrea is a well-known tenor, singer-songwriter, and multi-instrumentalist, and his estimated net worth is $100 million. He is one of the famous opera singers and has successfully created a distinguished place in the musical world. In addition, his voice is considered the most beautiful in the world.

Andrea lives with his second wife, Veronica Berti, and his manager. They first met in 2002, and in September 2011, the couple announced that Veronica was expecting her first child, a daughter. On 21st March 2012, their daughter, Virginia, was born.

On 12th November 2022, at the UK Festival of Remembrance, Andrea, Matteo, and Virginia sang together at The Royal Albert Hall.

On 21st March 2014, Andrea married Veronica at the Sanctuary of Montenero, located in the coastal town of Livorno (Italy). Andrea currently resides with his family in a lavish villa in Forte Dei Marmi, located on the Mediterranean coast of Italy. And his first wife and two sons reside in the couple’s previous home in the same town in Versilia.

In 1992, Andrea got his big break when a demo tape containing the version of the song ‘Miserere’ was sent to Luciano Pavarotti, an Italian tenor; he was highly impressed by Andrea’s music. They then recorded a duet that became a huge hit throughout Europe. Further, in 1993, Andrea accompanied Italian rock star Zucchero on his European concert tour. They both sang duets, and Andrea was also given solo sets during the tour. That same year, in December, he performed at a concert at the Teatro Romolo Valli (Reggio Emilia).

In 1994, Andrea released his debut album, ‘ Il mare calmo della sera,’ and in 1999, his album ‘Songo’ was released. Album ‘Songo’ reached the top number in pop Album charts worldwide and sold around 10 million copies. In addition, Andrea was nominated at the Grammys for Best New Artist; it was the first time (since 1961) that a classical musician was nominated for that category.

That same year, the album Sacred Arias,’ featured music composed in traditional Christian style. It consists of tracks including ‘Ave Maria (Funeral for a Friend)’ and ‘Panis Angelicus.’ In addition, the album peaked at no.1 on the Italian, Canadian, and Netherlands Album charts.

In 2002, his album ‘Sentimento’ was released, and the conductor was Lorin Maazel and London Symphony Orchestra. The album won several awards and accolades.

In January 2006, Andrea’s album ‘Amore’ was released for the Valentine’s Day season. On the album, a remake of Elvis Presley’s song ‘Can’t Help Falling in Love’ was featured, and a duet of ‘Somos Novios (It’s Impossible)’ which he had sung along with Christina Aguilera.

In 2009, Andrea released his first-ever Christmas album, titled ‘My Christmas,’ a collection of holiday favorites in Italian, English, French, and German. The album’s only original song was ‘God Bless Us, Everyone. The album was one of the best-selling albums of that year.

Further, on 29th January 2013, Andrea’s album ‘Passione’ was released. The album has a collection of Mediterranean love songs and contains duets with Jennifer Lopez and Nelly Furtado. The multilanguage album has French, English, Italian, and Spanish songs.

On 7th February, at the 61st Annual National Prayer Breakfast, Andrea was an honorary guest held at the Washington Hilton; he performed in the presence of President Barack Obama and First Lady Michelle Obama, including several other political leaders. On 20th February, Andrea performed in a concert dedicated to the 20th anniversary of Gazprom. On 1st June, Andrea performed along with Plácido Domingo at the Arena di Verona.

In June 2018, Andrea released the single “If Only,” his first in fourteen years. On 20th September 2018, he released the single “Fall On Me,” featuring vocals from his son Matteo. On the 22nd October episode of Dancing With the Stars, the two performed the song. In the same month, the song’s English version was released. Both songs appear on Andrea’s album Sì, released on 26th October 2018.

On 1st February 2019, he performed for the first time in Saudi Arabia in a sold-out concert at the ‘Winter at Tantora festival’ running at Al-‘Ula. On 3rd July 2019, he also performed at the Summer Universiade in Naples opening ceremony with three songs, including “Fall On Me,” alongside his son Matteo.

During the national COVID-19 lockdowns in Italy, Andrea performed an Easter Sunday concert on 12th April 2020. On 13th September 2020, at the 2020 Tuscan Grand Prix, Andrea performed the Italian National Anthem.

In November 2020, Andrea released an album, Believe, in response to the COVID-19 pandemic. Further, on 11th June 2021, he performed in the Opening Ceremony of the UEFA Euro 2020, which was held in Rome, Italy.

On 5th June 2022, Andrea performed during the BBC’s Platinum Party at the Palace. On 21st October 2022, he released his 1st collaboration album, A Family Christmas with Matteo (his son) and Virginia (his daughter).

Andrea has a massive fan following. On Facebook, Instagram, and Twitter, he has around 6M, 1.9M, and 299K followers, respectively. Whereas on YouTube, he has around 5.5 M subscribers. Andrea’s all social media profiles mainly include his upcoming projects, promotions, concerts, and award function pictures.