Whenever we hear the term cigarette, the first thing that strikes is that caution warning printed on every cigarette box. Although smoking is harmful to our health, it has also been proved experimentally people still love cigarette and cannot get rid of it due to the addictive property of nicotine. Smoking is one of the most common forms of refreshment drug use in India. Tobacco smoking is the most common form, being practised by one billion people in entire world. Smoking cigarette comes from centuries ago while people started experimenting on tobacco plants and found its addictive property. The scientific name of tobacco plant is “Nicotina Tobacam”. Dried leaves of this plant are rolled to make cigarette or bidi which are smoked by the smokers. It is said that smoking gives smokers a kick which makes them smoke again and again.

After China, India is the second biggest producer of tobacco in the world. Currently, India is exporting tobacco to eighty nations around the whole world. In recent years many new brands are coming up with new ways to present tobacco to a growing amount of anti-tobacco groups. These brands provide deluxe and expensive cigarettes and other tobacco-related consumables. Prices of these cigarette packets (Approx 20 cigarette per pack) can range anywhere from 50 Indian rupees per pack (approximately $0.9) to 3000 Indian rupees or even more. These prices depend upon production cost, advertisement and material used in the particular cigarette.

We have listed Top 10 Cigarette Brands used in India with their maximum retail price in Market. 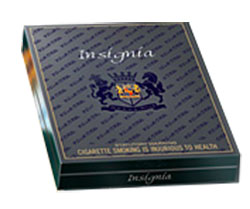 This Insignia brand of Cigarette comes from the top producer in India,  ITC limited. This is one of the high priced cigarettes in India and famous among corporates and college going, students. The packet comes in matte black packages which are very attractive and sold in a single variety. The Insignia cigarettes are famous for the smooth flow of the tobacco smoke through the filter and the taste.

Price of Insignia cigarettes pack is around Rs.165.

Pall Mall brand cigarettes are produced and marketed by R. J. Reynolds Tobacco Company (USA). It is one of the highest selling brands among all cigarette brand. It is well-known for its design as well as taste. They come in two different sizes, short and long cigarettes. A specific technique is applied here in stuffing the tobacco and adding charcoal inside the cig. Pall Mall comes in different of varieties such as white, black, blue, orange and green which related to the number of menthol contents and intensities of the tobacco of the cigarettes.

Price of Pall Mall cigarettes pack is around Rs.4500. Parliament is a rich cigarette brand famous among entrepreneurs and business owners. This cigarette brand is known for the production of filtered cigarettes. These cigarettes are sold and marketed by Philip Morris Company(USA). These were first cigarettes which had paper filters that allow only the nicotine to reach the smoker’s mouth. They come in varieties of menthol flavour like Green Pack, White Pack, Kings and Silver Pack. Green Pack is full of menthol flavour, White Pack with Menthol Lights, Kings and Silver Pack with menthol ultralights. They are famous for their beautiful fragrance and excellent taste. Price of Navy cut cigarettes is around Rs.100. Price of Benson and Hedges is around Rs.250 Price for per 10 pieces pack of Four Square is around Rs. 96 Marlboro is the most abundant selling cigarettes brands in the world. The company Philip Morris manufactures these cigarettes within the United States. Marlboro cigarettes become most famous after its ads featuring Marlboro man. Marlboro comes in varieties and forms such as Red, Advance, Menthol and Clove. Phillip Morris initially launched Marlboro cigarettes especially for women which include the red band to hide the lipsticks spot from the filter and then later the brand placed itself as filtered cigarettes for both woman and man. We believe this guide top 10 India’s best cigarette brands will help you find perfect cigarette quickly than spending time on research or trial and error. Do you like any brand specifically from this list or use any other brand, not on this list, let us know using our comments section. Share the list Facebook with your smoking group and ask for their opinion.