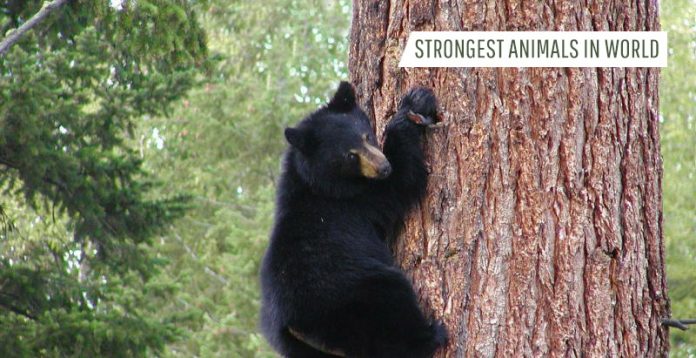 Who is more powerful? Largest animal or Smallest animal– obviously, you would believe that organisms who are larger in size and heavier in weight are stronger. But it would be wrong to assume that there are small species in the world whose strength is more than giant animals.
Each animal has a varied type of power. The strength of some species can lift, pull, hold, or drag heavy loads. Other animals may be too small to see but have considerable ability according to their size.
Here we depict the list of 10 strongest animals in the world by strength to weight ratio:

The King of birds is one of the strongest birds in the world who lift heavy weight easily. Mainly it’s found in Africa and Eurasia. But some species of Eagle are also from Australia, Central America, South, and North America.
It belongs to the raptors group, who hunt large vertebrae for their food. Like other birds of prey, they have large and heavy hooked beaks to lift their prey. Also, have large heads, powerful claws, strong and muscular legs or feet. The most robust feature is their eyes, which have more visual acuity than humans. Also helps them to catch their prey from long distances. Without rest, they can fly for hours and use their power to fly higher.

The second-longest and heaviest snake in the world is Green Anaconda. A boa species lives in Colombia, Venezuela, the Guianas, Peru, Bolivia, Brazil, Trinidad, Ecuador, and Tobago. Anaconda is also used on enemies with the motive to give up or die.

Historically, it is challenging to locate, capture and fetch their target because of their length. They twirl their body around the prey and clasp it to death. Then they gulp the dead prey wholly. The prey size does not make any difference to them. They can spontaneously consume even large prey.

Grizzly Bear is one of the fearless animals in the world. It has a muscular hump, rounded ears, long claws, and a massive head. Each year, they hibernate for 5 to 7 months, and female bears give birth to their cubs during this period. They don’t consume food at the time of hibernation. Typically, Grizzlies are secluded and active creatures. Also, they are protective of their cubs, and if they feel any threat from other animals, they will attack.

In India and Australia, oxen are recognized as Bullocks. It is a massive and powerful cattle breed. Formerly, they are used for transportation, farming, irrigation, and grinding grains. These large horned mammals can load heavyweights for an extended period than other draft animals.

The largest and strongest species from the cat family is Tiger. Almost 93% of the population of tigers was lost till the 20th century. On the IUCN Red list, it is recorded as the world’s most endangered animal. The main causes for declination of their population are poaching, habitat fragmentation and destruction. They reside in Southeast Asia.
It has a robust body with strong forelimbs, a big head, and a tail (almost half its body length). Its fur is thick and heavy. They usually hunt large and mid-size mammals alone and wait for their quarry, dominating them from any position, using their strength to stop the prey’s stability.

Each species of Gorilla are endangered and the largest living primates. Their DNA is highly similar to humans. They inhabited Sub Saharan Africa’s tropical and subtropical forests. They are distinguished by their knuckle-walking, carry weight with their fists’ help, feet, hand backs, and palms.
This powerful primate split their day among rest, travel, and feeding periods. Their arms are more muscular than other creatures and swing from one tree branch to another with the help of it.

The world’s largest terrestrial animal is African Bush Elephant. It belongs to forests, grasslands, wetlands, and agricultural land of African countries. As compared to Asian Elephants, it is bigger and stronger with large ears. African Elephant is one of the longest living animals in the world.
This largest mammal has a solid trunk that lifts 200 kg weight and consists of 40,000 muscles and tendons. They are herbivores and mainly eat grass, leaves, herb, and creeper. Also, their long tusk is used for defense against attackers, digging, and fighting with others.

Leafcutter Ant is also called leaf chewing ant, one of the world’s strongest species. They can pick 50 times more load than their body weight. Their jaws are very potent to hold leaves and other objects. Parasol Ant covers huge distances while carrying weight.
Leafcutter ants can damage the plants and agricultural lands from pesticides and demolish the crops, farmlands, roads during their nest making.

One of the powerful creatures of the insect is Rhinoceros Beetle. The other names of this insect are horn beetle, Hercules beetle, and unicorn beetle. They are identified for their size and shape. It carries almost similar weight as a human. They are called rhinos because of their strong horns. Their horns are used to support during fights with other beetles as well as to attract female beetles. These beetles are not hurt or bite others, so it isn’t dangerous.

The strongest species in the world is Dung Beetle. They also named rollers because rolling the dung in a round shape. Used it as a breeding cell or source of food. To improve their strength, they fight with their horns and defeat the enemy. Except for Antarctica, they exist on all continents. The tunnelers beetle used the tunnel to store the dung.

As we read above about the strongest creatures, body heaviness and hugeness are not necessary to be the most strong. Good diet, muscular body, willpower and determination are essential for gaining strength.

Some creators have their own wings to fly, but some are able to leap very high without wings. To know about such animals of the world which are very high jump, check out the top 10 highest jumping animals in the world.