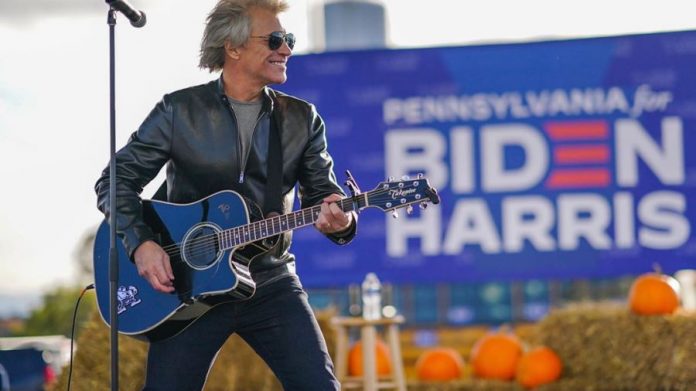 The new album of Bon Jovi, 2020, is currently the most socially conscious album with a collection of songs that tackle various contemporary issues. The songs talk about gun control; the Black Lives Matter protests and the struggled migrants; you can notice these themes in songs Lower The Flag, American Reckoning, and Blood in the Water, respectively. Jon Bon Jovi, the frontman, continuously insisted that he is not trying to preach his view of what’s going on globally. Still, he also stated that Blood in the Water is a comment on the administration!

The 1980’s artist Jon Bon Jovi explained that the song starts with “A storm is coming,” and the song implies that the current administration’s end is near! Bon Jovi expressed his feelings and told us that he is heart-broken because of the conflicts among people in America, and he wishes to live in a “We” society rather than a “Me” society.

Bon Jovi went on Saying that he understands why Donald Trump won the previous elections because the voiceless voices were overlooked. According to Bon Jovi, now they have spoken, and if Trump is elected again, it will be the voice of the people, given it is a fair and accurate election! In 2016 Bon Jovi actively supported Hillary Clinton against Donald Trump, and this year he is supporting Joe Biden. He added that he never used the stage for political issues, but now with the audience, the stage is also divided.

Jon Bon Jovi performed for Biden in Dallas, Pennsylvania, on 25th October; there were almost 230 cars there. Trump made himself very clear that he is not impressed by the crowd Bon Jovi managed to attract. During a campaign rally on 27th October, in Omaha, Nebraska, Donald Trump took a shot at Bon Jovi. He joked about the number of people who showed up to watch him and former President Barack Obama. Trump said that “Barack Obama brought Bon Jovi along and what really happened? Only 22 people joined the crowd!”

Bon Jovi and Trump have a history; Bon Jovi called out Trump before the previous presidential elections also. Bon Jovi stated that he prays for Trump not to be the next president of America,” his wish didn’t come true. Bon Jovi also attacked Trump in 2018 by calling him an evil genius at the Howard Stern show. These words came out of Bon Jovi because Trump deployed allegedly dirty tricks to keep the rocker from buying Buffalo Bills.

Bon Jovi took to Instagram on 26th October to thank the fans for joining the Virtual concerts. He captioned that the shows are looking different than before as the fans are not present in person. Jon Bon Jovi encouraged fans to vote for Joe Biden, and he added that now the importance of a vote is higher than ever, for us and the future generations. However, the comment section says it all, most of the comments didn’t agree with Jon Bon Jovi, and you can see a chain of Trump supporters’ comments.

Thank you to everyone who tuned in to the virtual concert last night. Shows are looking a little different for us now that we can’t be together in person… but regardless, it was a huge honor to perform in support of @JoeBiden and @KamalaHarris. Please get out there and #VOTE — the outcome of this election is going to be more important than ever, not just for us, but for future generations. Check out the link in my bio for resources to help you make a voting plan. #BidenHarris2020