The cheetah, also known as the hunting leopard, is a big cat that occurs mainly in eastern and southern Africa and a few parts of Iran. The only extant member of the genus Acinonyx, it is placed in the subfamily Felinae The pronghorn is a species of artiodactyl mammal indigenous to interior western and central North America. The blue wildebeest, also called the common wildebeest, white-bearded wildebeest or brindled gnu, is a large antelope and one of the two species of wildebeest
Speed : 52 kmph / 81kmh The lion is one of the big cats in the genus Panthera and a member of the family Felidae. The commonly used term African lion collectively denotes the several subspecies found in Africa. 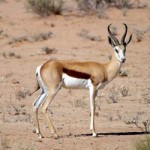 The springbok is a moderately sized antelope found mainly in southern and southwestern Africa. The sole member of the genus Antidorcas, this bovid was first described by the German zoologist Eberhard August Wilhelm von Zimmermann in 1780 The European hare, also known as the brown hare, is a species of hare native to Europe and parts of Western Asia and Central Asia. It is a mammal adapted to temperate, open country. The red fox is the largest of the true foxes and the most abundant wild member of the Carnivora, being present across the entire Northern Hemisphere from the Arctic Circle to North Africa, North America and Eurasia.

Lifespan: 5 years (In the wild) The Grant’s gazelle is a species of gazelle distributed from northern Tanzania to South Sudan and Ethiopia, and from the Kenyan coast to Lake Victoria. Its Swahili name is Swala Granti. The Thomson’s gazelle is one of the best-known gazelles. It is named after explorer Joseph Thomson and is sometimes referred to as a “tommie” The horse is one of two extant subspecies of Equus ferus. It is an odd-toed ungulate mammal belonging to the taxonomic family Equidae.