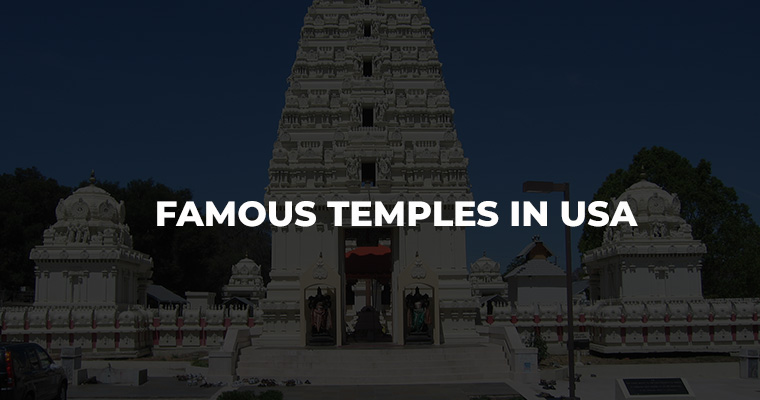 Famous Temples in USA-Are there too many Hindu temples in America today?

A brief count of Hindu-temple websites and the number of temples listed with the “Council for Hindu Temples of USA” reveal a conservative estimate of about 80 temples.

Far too many, in my opinion.i have listed few A Hindu temple built in 1981 with traditional south Indian style and it is owned and operated by the Hindu Temple Society of Southern California. The priests are situated and live on the grounds of the temple. The temple has many gatherings for ceremonies, and provides numerous space for meditation, picnicking, it has a full stage for special cultural and Hindu programs. The Swami Narayan Mandir built in 2005, is the largest temple and also the 6th traditional Hindu stone temple built outside of India. Opened on 2007.

The structure of the temple is 32,000 ft. sits on 30 acres. With hand-carved stone spires that tower 75 feet (23 m), it is the tallest building in Lilburn, Georgia, dominating the intersection of Rock Bridge Road and Lawrenceville Highway. The 35,000-pieces of stone were shipped for the building and 1,300 craftsmen and 900 volunteers were worked together. More than 4,500 tons of Italian Carrera marble, 4,300 tons of Turkish limestone, and 3,500 tons of Indian pink sandstone was quarried and shipped to the craftsmen in India. The traditional design features custom-carved stonework, a wraparound veranda and five prominent pinnacles reminiscent of the Himalayan hills.

Upon completion, a keystone weighing more than 2 tons was twisted into place on the ceiling of the central dome inside. This Temple is a white granite stone Hindu temple sculpted in India and currently under construction on the Hawaiian island of Kauai. It is the first all-stone temple to be built in the United States. It is maintained by Kauai Aadheenam and Kauai’s Hindu Monastery.

The traditional design according to the Saiva Agamas, designed to last 1000 years and entirely carved by hand. Carving of the 3,000-plus blocks of granite commenced in 1990 at a worksite in Bangalore, India.

1.The temple possesses a number of rare architectural features. 2. The 4-foot-thick (1.2 m) foundation is made of a crack-free.3.There are exhibitions of the stone carver’s craft with two sets of “musical pillars” whose tall rods are designed to resonate precise musical tones when struck with a mallet. 4. Others include six stone lions carved into the pillars each of which contains a stone ball freely rotatable in its mouth but not removable, a large stone bell, and 10-foot-long (3.0 m) stone chains with loose links.

The whole space of the temple is defined in multiples and fractions of one unit, 11 feet (3.4 m) and 71/4 inches. Iraivan Temple will be completely free of electricity for mystical reasons.

The main murti is the sivalinga, a pointed, six-faced 700-pound clear quartz crystal and also especially sacred because it represents the element akasha. The Narayan temple opened in 1998. It was built at the cost of $10 million, reportedly the most expensive Hindu temple in the Midwest at that time. The temple boasts of marriage and banquet facilities and is 34,000 square feet (3,200 m2) in size.

The temple celebrated its 10th anniversary in 2008 with carnival games and raffles, Indian craft exhibits, henna temporary tattoos, historical exhibits, guided tours of the temple, live dance performances and native foods. Eleven different cultural performances were organized by temple youth as part of the procession. Officials expected 5000 people to take part in this celebration and peoples from the different part of USA, India and England. In 1996, planned upon building a traditional south Indian style temple. The construction began in April 1999, and 12 ships arrived from Mahapalipuram India to start Indian style in April 2000.

The temple has two buildings. First is the traditional building with two raja entrance towers and two Vimana towers over each of the main Shiva and Vishnu shrines. The total area is approximately 6200 sq. Feet. The architectural style belongs to Cholas and palaver for lord Shiva and Ayyappa shrine is built by the Kerala style architecture.

Second building is the community hall which is inaugurated in April 2001.it has a capacity for 300 people to occupy and is available for weddings, various celebrations and cultural activities.

The temple started from November 23, 2001 and opened to the public. In addition, there is a separate Spiritual Centre, named after Swami Vivekananda. It serves as a venue for many spiritual activities, including meditation, yoga classes, and spiritual lectures.

In the campus a 10-foot tall bronze statue of Swami Vivekananda. It is the first statue of Vivekananda to be installed in a public place in the United States of America.

The Rama temple is built to specifications in the authentic style of the Cholas. The temple’s architecture is a perfect blend of the ancient with the modern. Its magnificent 80-foot tower is a potent symbol of Hindu spirit. A large hall in the lower level of the temple has facilities to stage cultural events.

A smaller temple north of the Rama temple is the Ganesh-Shiva-Durga temple. This temple is built in the architecture style of the Kalinga dynasty. It is the first temple in the United States that is dedicated to the Hindu deity Murugan. It is planned in the 1980s and opened in 1999The main sannidhi at this temple is for Murugan (Karttikeya) with Valli Devasena. There are four other sannidhis, for Vinayaka (Ganesha), Siva, Meenakshi and Palani Aandavar.

The grand procession of Lord Murugan with Valli Devasena takes place during major festivals. During August the Murugan ascends in the Ratham. The second Kumbabhishegam for all deities in the Murugan Temple was performed on 13 May 2011. The Hindu temple and cultural centre was established 1996. It has a modern and original Hindu architectural style. Found and supported by humble devotees, SDC serves as a prayer and meditation centre, for Tampa Bay dwellers. The motto is “The God is one – wise men give different names.

Sri Lakshmi Temple was built in 1980’s and is spread over an area of 12 acres.  Rajagopuram of the temple at a height of 50 feet from the ground is an attractive feature of the temple and the construction took two years; with the guidance of Muthiah Sthapathi. Various daily poojas, festivals, shloka classes, culture/Indian-languages classes, etc. are conducted by the temple authorities. . Temple includes deities of Sri Maha Ganapati, Sri Mahalakshmi, Sri Venkateswara, SriNataraja, Sri Subrahmanya, Sri Hariharaputra, Garuda and Navagraha.

It has a theertha peetam (pilgrimage) in the west for Devi ParaShakthi. The Temple was built in 1999 and the inaugural pooja took place on Vijayadasami day. The Temple land is known for its mystical properties and was once home to the powerful Native American healers.

Dr. Krishna Kumar is a major donor and has spent millions of dollars for the construction of the Temple. He build a temple for peace, happiness and paramount success.

Divine Mother Parashakthi is the one place ,separated into Shiva and Shakti. At Parashakthi Temple, she is present as Parashakthi Karumari Ambika who is closest to the earthly creations. The Mother Parashakthi Sanctum (Sannidhi) is also graced by the presence of the Maha Meru which now confers the status of RajaRajeswari/ Bhuvaneswari to this Sannidhi. Further, on the same pedestal, there is Goddess Raja Matangi, Devi Varahi Ambika and Devi Bhuvaneshwari. The presence of the different aspects of the Great Mother along with the Maha Meru makes this a very highly energized focus of worship. Compounding this power is the presence of Mother Neelavani who sits high above the Sannidhi.