Hawa Mahal stands upright as the entrance to the City Palace, Jaipur. An important landmark in the city, Hawa Mahal is an epitome of the Rajputana architecture. The splendid five-storey “Palace of the Winds” is a blend of beauty and splendor much close to Rajasthan’s culture. Maharaja Sawai Pratap Singh built Hawa Mahal in 1779. The pyramid shape of this ancient monument is a tourist attraction having 953 small windows. Taj Mahal, the pinnacle of Mughal architecture, was built by the Mughal emperor Shah Jahan (1628-1658), grandson of Akbar the great, in the memory of his queen Arjumand Bano Begum, entitled ‘Mumtaz Mahal’. Mumtaz Mahal was a niece of empress Nur Jahan and granddaughter of Mirza Ghias Beg I’timad-ud-Daula, wazir of emperor Jehangir. She was born in 1593 and died in 1631, during the birth of her fourteenth child at Burhanpur. Her mortal remains were temporarily buried in the Zainabad garden. Six months later, her body was transferred to Agra to be finally enshrined in the crypt of the main tomb of the Taj Mahal. The Taj Mahal is the mausoleum of both Mumtaz Mahal and Shah Jahan. Victoria Memorial, one of India’s most beautiful monuments, represent a unique combination of classical European architecture and Mughal motifs. The domed and white marble museum sprawls over 64 acres and is set in a landscaped garden at the southern side of the Kolkata’s maidan (ground) near Jawaharlal Nehru Road. The charminar Hyderabad’s best known landmark was built 1591 by Sultan Mohammed Quli Qutub Shah to appease the force of evil savaging his new city with epidemic and plague. Standing in the heart of the old walled city and surround by lively bazaars, the charminar (‘four tower’) is a 56m high triumphal arch. The arch is notable for its elegant balconies, stucco decorations and the small mosque, Hyderabad’s oldest, on the 2nd floor. An image of the grace every packet of charminar cigarettes, one of India’s most popular brand. Sanchi is situated in the state of Madhya Pradesh in India. It lies at a distance of approximately 52 km from the capital city of Bhopal and 10 km from Vidisha. The major attractions of Sanchi include a number of Buddhist stupas, monasteries, temples and pillars. All these structures date back to somewhere between 3rd century BC and 12th century AD. The Mauryan emperor Ashoka founded all the stupas at Sanchi in the honor of Lord Buddha. They have the distinction of being included by UNESCO in its list of World Heritage Sites. Qutub-ud-din Aibak laid the foundation for Qutub Minar in 1199 AD and his successor and son-in-law Shamsu’d-Din- Iitutmish completed the structure by adding three more stories. Standing at 72.5 meters, it is the highest stone tower in India. Its base diameter is 14.3 meters and its top diameter is 2.7 meters. It has 379 steps leading to its top story. The lower three stories are made using red sand stone and the top two with marble and sand stone. The Cellular Jail, also known as Kālā Pānī (Hindi: काला पानी क़ैद ख़ाना, literally ‘black water’, in the sense of deep sea and hence exile), was a colonial prison situated in the Andaman and Nicobar Islands, India. The prison was used by the British especially to exile political prisoners to the remote archipelago. Many notable freedom fighters such as Batukeshwar Dutt and Veer Savarkar, among others, were imprisoned here during the struggle for India’s independence. Today, the complex serves as a national memorial monument. 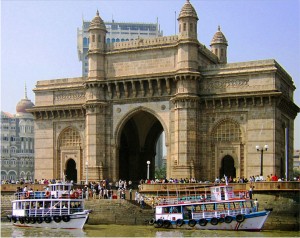 The majestic Gateway of India is a glorious historical memorial built during British rule. This magnificent monument has been built in Indo-Sarcenic style to commemorate the visit of King George V and Queen Mary to Bombay. Gateway of India is one of the finest example of colonial architectural heritage in India. This grand structure stands at the Apollo Bunder, a popular meeting place in Mumbai. The gateway of India was designed by the British architect George Wittet and was opened for general public in the year 1924. Vidhan Soudha counts amongst the most impressive as well as the most magnificent buildings in the Bangalore city of India. It is mainly famous for housing the Legislative Chambers of the state government. The three hundred rooms of Vidhan Soudha accommodate approximately twenty-two departments of the state government. The building rises to a height of almost 46 m, making it one of the most imposing structures in the city of Bangalore.
Built in the year 1956, Vidhan Soudha of Bangalore boasts of exquisite Dravidian architecture. It was built under the then chief minister of Karnataka, Mr. Kengal Hanumanthaiah, as a tribute to Indian temple architecture. The chief engineer of Vidhan Soudha, B.R. Manickam mainly made use of granite to get the edifice constructed. In the following lines, we have provided more information on the architecture of the Vidhan Soudha of Bangalore, India.